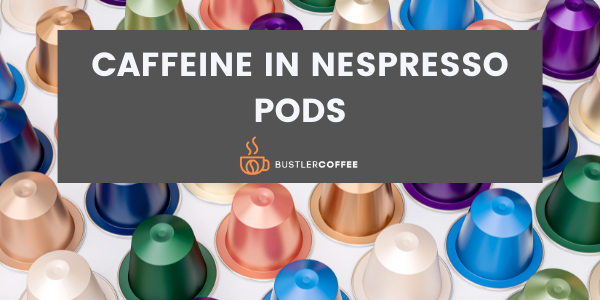 Nespresso is a popular brand, known for its pods. Are you also a fan of Nespresso pods? If yes, then have you ever wondered how much caffeine is there in these pods?

Well, if you are hunting for the right answer, then there you go!!

However, the answer may vary for the different varieties of pods launched by Nespresso.

In this article, I will share the caffeine content in the two major lines of Nespresso; Original and Vertuo line. I will also guide you about the intensity level and the highly caffeinated pods.

I bet you are going to learn plenty of new things here, so keep reading until the end of the article!

Both Original and Vertuo lines differ in the quantity of coffee and caffeine content in their pods. Thus, you will find 13 Nespresso pods in the Vertuo line while 35 pods in the Original line.

Vertuo line capsules have a higher caffeine content as compared to the Original line.

Yes, different Nespresso pods have different levels of caffeine. However, the amount of caffeine lies between 60-and 90 mg.

The amount of caffeine in the Nespresso pod depends on two factors; the amount and type of coffee beans used.

Have a look at the table below:

How much caffeine is in each capsule?

One Nespresso capsule makes a cup of Espresso containing 50 to 100 mg of caffeine in it.  The amount is the same for both Original and Vertuo lines with a few exceptions like Kazaar, Ristretto, etc.

Intensity level has no relation to caffeine content. The higher the intensity level, the stronger the coffee cup and vice versa.

Nespresso pods that lie between the range of 9-13 are dark roasted with strong intensity and bitter notes.

The pods lying between the range of 6-8 are the mediocre ones with a well-balanced taste of sweet and bitter.

From 1 to 5, Nespresso pods have a sweet and subtle taste with low intensity.

Vertuo line capsules are large and are only compatible with their respective machines.

A single shot of espresso contains 60 mg of caffeine. Among the popular flavors are Altissio, II Cafe, and Voltesso. The most highly caffeinated single espresso capsule, made of Robusta beans, is Diavolitto. It contains 150 mg of caffeine.

Alto coffee pods are rich in caffeine, containing 228-350 mg. The volume of a coffee cup is 14 ounces. Popular Alto pods are Dolce XL and Intenso XL.

Coffee or mug contains 170-200 mg of caffeine. They are available in a variety. A few most common coffee/mug pods are Caramel Cookie with notes of caramel, Vanilla Custard Pie with notes of vanilla, and chocolate fudge with a bitter flavor of dark chocolate.

Pour-over coffee pods are twice the volume of regular pods. Nespresso Vertuo Next Model enables the user to prepare coffee from Pour over style pods. If you are brewing an 8-ounce cup, its caffeine content will lie between pour-over and standard coffee pods.

Ristretto contains 55-65 mg of caffeine with a complex of acidic and bittersweet notes.  Ristretto and Ristretto decaf is the most common pods in this range.

Espresso contains 55-65 mg of caffeine. You can find a variety of Espresso pods in Original Line. Some of the popular Espresso pods are Caramel Creme Brulee, Vanilla Eclair, Colombia, Palermo Kazaar, and Napoli.

Lungo pods contain 77-85 mg of caffeine. As compared to espresso, you need extra water to brew these pods. As a result, you will get comparatively more coffee. Popular Lungo pods are Vienna, Tokyo, and Stockholm.

How much caffeine is in Decaffeinated Nespresso capsules?

The final product is again checked for the caffeine content.  The decaf pods should contain caffeine below 0.1%.

Which Nespresso pod has the most caffeine?

Palermo Kazaar is the most caffeinated Nespresso pod. It contains 120-125mg of caffeine. It has a high-intensity level of 12 with dark roasted coffee.

What Affects the Caffeine in Nespresso?

The amount of caffeine per cup depends on the following factors:

Caffeine content depends on the type of Nespresso pod you choose. According to www.contact.nespresso.com, Lungo capsules contain 77 to 89 mg of caffeine, and single espresso has 60 mg of caffeine.

So, if you are using a Vertuo line machine, your coffee cup contains more caffeine.

Despite being considered, decaf capsules are caffeine-free, but they still contain minimal amounts of caffeine.

Nespresso claims that its decaf coffee cup contains no more than 3 mg of caffeine.

As mentioned earlier, the intensity level is not the measure of caffeine. It indicates the roast and bittersweet flavor of the coffee.

Nespresso exclusively mentions intensity levels on the pods that will guide you about the taste of the coffee.

Different pods vary in the amount of caffeine. Have a look at the table above. You will find pods with different intensity levels and cup sizes. You can choose the pods according to the Nespresso machine you have. Because Original line and Vertuo line pods are not interchangeable.

I hope this article was helpful!!

Hey! 👋 I'm a passionate coffee hobbyist and have been crazy about caffeine over a decade. I'm on a journey to bring people a smooth experience all over coffee.