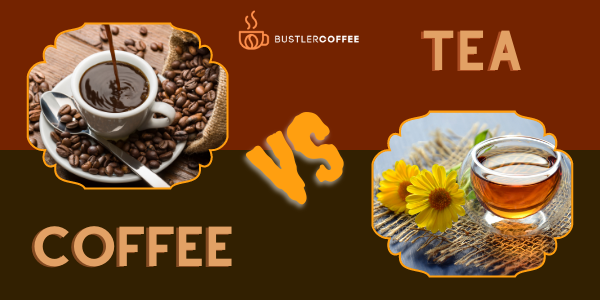 Coffee and tea are the favorite of everyone and are highly consumed in our daily lives. Whether it’s breakfast or brunch, it’s incomplete without these beverages. Consuming it without knowing its benefits is a loss. Let’s have a look at the benefits of Coffee vs. Tea.

Coffee is a brewed beverage made by adding boiling water to a coffee pot containing roasted and ground Coffee beans, the seeds of a fruit known as a coffee cherry. Coffee cherries grow on flowering plants belonging to the coffee genus. It was discovered when a 9th-century Ethiopian goatherd Kaldi first realized the benefits of coffee beans. As coffee moved eastwards and reached the lands of Arabia, the steep rise in its cultivation and trade led coffee to become one of the most widely-consumed beverages in the world.

It is acidic, appears dark-colored, and carries a bitter taste. It contains several compounds, including antioxidants, diterpenes, and caffeine, promoting alertness and improving metabolism. Moderate coffee intake may support cognitive health weight loss, prevent heart failure, and reduce your risks of developing Parkinson’s disease. The Health Benefits of Tea vs. coffee are different and work differently.

Tea is a famous aromatic beverage prepared by pouring boiling water over fresh tea leaves. It is one of the most consumed beverages after water. Its history dates back to the 28th century BC, discovered by Emperor Shen Nung in China. Tea was consumed as medicine during that time, but gradually, it rose to become a daily household drink. Today, tea is grown all over the globe, especially in Asia and Africa.

There are over 3000 types of tea, each offering a distinct taste experience. Different manufacturing methods produce different varieties of teas with additional oxidation and fermentation levels. White tea tastes a bit creamier, sweeter, and softer than green tea to put things into perspective. Tea contains caffeine, a powerful stimulant that boosts the activity of the human brain and nervous system. It is also full of antioxidants, like flavonoids and polyphenols, that neutralize the harmful effects of free radicals in the body. However, drinking too much tea may disturb the flow of iron absorption causing insomnia, heartburn, and weak mental health.

Types of Coffee vs. Tea

Coffee comes in various types and can be consumed in multiple ways. Some popular coffee-brewing methods include

They served in both ways as hot or cold coffee. These yummy Coffee types are prepared by just following these minor alterations.

Cappuccino coffee: It is also espresso-based, prepared with steamed and foamed milk.

Latte coffee: A yummy latte is formed by mixing espresso with more steamed milk and a light foam layer.

If we put tea plant leaves in boiling water for some time, tea is ready. Adding milk, sugar, and ginger as extra ingredients enhances the tea flavor. Different regions prefer different tea varieties such as:

Benefits of Coffee vs. Tea

Coffee is a rich source of caffeine, a central nervous system stimulant that promotes alertness. An average (240ml) cup of coffee has almost 95 milligrams of caffeine in it, nearly twice the amount found in black tea. However, the amount varies depending on different coffee types. Similarly, various kinds of teas vary in terms of caffeine content. For example, black tea contains an average of 47 mg of caffeine per 8-ounce cup, the highest among other teas. Pu-erh, oolong, green, and purple teas also have considerable amounts of caffeine. White teas have the lowest caffeine quantity with only 15-30 mg caffeine per cup.

Caffeine serving 75-mg increases attention and alertness, while a serving of 160 to 600-mg dose works as an agent to improve mental alertness, speed reasoning, and memory.

Drinking coffee is preferable to receiving an instant energy dose that makes you mentally active and keeps sluggishness at bay. It is a healthy alternative to sugary energy drinks because it is a rich source of caffeine. By blocking adenosine receptors, caffeine increases the body’s dopamine energy levels, reducing tiredness and fatigue. Caffeine also helps to improve physical performance during endurance exercise. The European Food Safety Agency (EFSA) recognizes that caffeine can increase endurance performance, endurance capacity, and reduction in perceived exertion.

Compared to coffee, tea has fewer amounts of caffeine. But this is substituted by l-theanine, a potent antioxidant that helps tea become a great energy booster. It reduces body cortisol levels, leading to a happy mood and an energetic mind.

Due to strong antioxidants, coffee can be a great source of relief for people suffering from depression. It is notorious for acting as a powerful mood-lifting agent and enhancing the brain’s ability to fight depression. It sharpens brain memory functions, improves focus, and brings robustness to overall cognitive health. People who drink coffee daily are less likely to develop neurodegenerative diseases such as dementia, Parkinson’s, and Alzheimer’s diseases.

Tea offers enormous benefits to our mental health by improving mood, reducing anxiety and depression. It calms the human mind, enhances its ability to focus, and relieves stress. Research shows drinking tea lowers the release of cortisol in the body. It has caffeine and l-theanine that increase cognitive performance and prevent neurological disorders. Overall, there is not much difference in the mental health benefits of tea vs. coffee.

Daily coffee drinkers live a heart-healthy life because they are less likely to die from cardiovascular diseases, including stroke, by 23%. Coffees increase longevity by minimizing the odds of developing type 2 diabetes, colon cancer, and liver issues. It keeps liver enzyme levels within a normal range. Caffeine consumption is also associated with improved athletic performance.

Tea contains unique antioxidants, called flavonoids, that strengthen the immune system and provide anti-inflammatory benefits. They lower LDL (bad) cholesterol and prevent blood clots. Drinking tea not only reduces the risk of death due to stroke by 21% but also cures other cardiovascular disorders because of its high polyphenol content. It also prevents cancer.

Drinking coffee promotes a habit of eating less by reducing appetite. It contains healthy nutrients and bioactive substances that effectively break down body fats. The increase in metabolic rate and release of fats stored in fatty tissues occurs due to caffeine intake from coffee. Tea vs. coffee, we can see, Tea aid in the weight-loss journey. A tea flavonoid, catechin, increases body fats’ breakdown by boosting metabolism. Caffeine consumption causes the body to become alert and active and burn more calories. It may suppress appetite and soothe an upset stomach.

Antioxidants are abundant in coffee, such as flavonoids, chlorogenic, caffeic, and ferulic acids. They inhibit the cell damage caused by free radicals and keep our bodies disease-free. A cup of coffee contains anywhere from 200 to 550 mg of antioxidant compounds.

Over time, drinking tea develops a significant antioxidant capacity in the blood. Because of the detoxifying impact of antioxidants like polyphenols, catechins, thearubigins, and theaflavins found in tea, the ability of free radicals to cause cell damage, blood clot formation, and cancer is vastly diminished.

Which is better: tea or coffee?

Tea vs. coffee is a never-ending debate. While it is a personal choice to choose between Coffee vs. Tea, keeping oneself aware of the pros and cons of each is helpful. Compared to Tea, Coffee contains high caffeine and antioxidant levels. If your goal is to elevate your energy levels immediately, a cup of coffee is your best friend because this may help our bodies become alert, focused, attentive and sharp. Our body can absorb caffeine entirely within 45 minutes after ingestion. On the flip side, tea is filled with L-theanine, a unique amino acid that slows down the stimulating effect of caffeine while supplying our body with stable and long-lasting energy.

Coffee is a great drink to achieve weight loss goals. It is a rich source of chlorogenic acids (CGAs), a plant-based compound that controls blood sugar spikes and drops insulin levels by lowering glucose absorption during digestion. This activates the fat-burning mechanism in the body, leading to a reduction in overall body weight. CGAs also reduce cholesterol and triglyceride levels. Studies indicate that they also exhibit anti-obesity properties. Moreover, coffee contains around double the amount of caffeine, an essential element that boosts metabolic rate and contributes to weight loss. Similarly, tea may also help a person lose weight by decreasing pancreatic lipase levels and improving fat absorption in the body.

Consuming antioxidants may treat chronic health diseases like cancer, diabetes, and stroke. On average, coffee drinkers enjoy more antioxidants per cup than their tea counterparts. The antioxidants found in coffee include flavonoids, trigonelline, quinine, ferulic and caffeic acids. Although tea is also loaded with antioxidant compounds such as theaflavins, thearubigins, and catechins, they are available in relatively more minor concentrations. These antioxidants alleviate cellular damage caused by oxidative degradation and free radicals.

Coffee drinking is linked with increased life expectancy. Thanks to the many bioactive and phenolic compounds present in coffee, it may lower the risk of all-cause mortality and help you live longer. These compounds improve our brain function and protect our body from several diseases.

Coffee reduces your risk of death from any ailment, especially cardiovascular disorders and type 2 diabetes. The effect is particularly noticeable in people who drank 3 to 5 cups a day compared to non-drinkers. It also protects against life-threatening cancers, stroke, Parkinson’s disease, and dementia. The quality of mental health directly impacts your physical health. Coffee helps you develop a strong and healthy brain, combating depression and suicidal tendencies.

There is no clear-cut winner who reigns supreme in this battle between coffee and tea. While coffee is rich in caffeine and gives a quick energy boost, tea is famous for smoothly raising energy levels due to l-theanine. Drinking coffee or tea comes with various mental, physical, emotional, and social benefits.

Which is more harmful: Tea or Coffee?

Neither tea nor coffee is inherently unhealthy or harmful. The way you drink and the amount you consume make a difference. If you regularly put added sweeteners and sugars in tea or coffee, your body may develop health issues over a period of time. Drinking in moderation is vital.

Does coffee give you energy?

Coffee is the best source of caffeine, a central nervous system stimulant known for fighting fatigue and increasing energy levels. As Caffeine blocks the receptors of a neurotransmitter called adenosine; this increases levels of other neurotransmitters in your brain that restrain your energy levels, including dopamine.

Is Green tea better than coffee?

If you feel restless or jittery after drinking too much coffee, you may be caffeine intolerant. In that case, it is recommended that you take Green Tea because it contains less caffeine than coffee while still providing you with a subtler energy boost. It is also loaded with cancer-fighting polyphenols.

Is black coffee healthier than tea?

Both coffee and black tea are healthy beverages. Coffee is a healthy choice if you are looking for a quick energy boost. It’s significantly better than having energy drinks. But if your goal is to lose weight, black tea is preferable because it is low in calories.

Why is coffee better than tea?

Coffee has more caffeine than tea; that’s why it provides more of the health benefits associated with caffeine, such as making it easier to breathe by relaxing your airways; we can say it is perfect for asthmatics, ideal for students and office workers as it improves memory, and constricting the blood vessels of the brain, enabling to relieve headaches and migraines.

What happens when you switch?

Swapping out tea for coffee or vice versa is a common occurrence. If you regularly switch between these two drinks, you can benefit from both tea and coffee. You could lower your cholesterol, improve sleep quality, prevent muscle cramps, and improve mood. This is also an excellent way to regulate your caffeine consumption.

Hey! 👋 I'm a passionate coffee hobbyist and have been crazy about caffeine over a decade. I'm on a journey to bring people a smooth experience all over coffee.